In order to play a role as a national university located in a local area yet internationally open, Kumamoto University aims to be a global university connecting communities and the world.

The global activities and performance in recent years are listed below:

■Promotion of the acceptance of international students 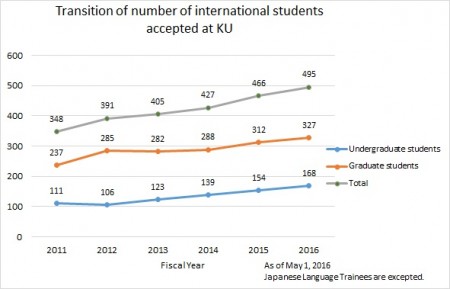 Kumamoto University has university/department level-exchange agreements with 209 partner universities/institutions from 44 countries/regions (as of October 1, 2016), and the University is aiming for further expansion. 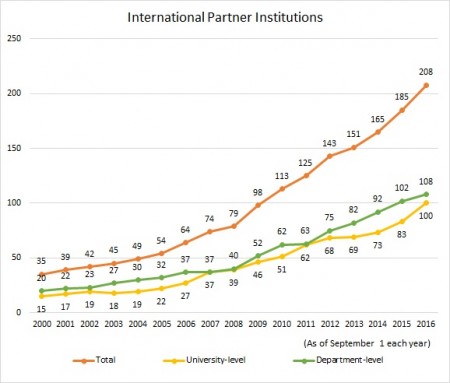 ●Opening of a joint office for six national universities in Changchun (November 14, 2014)
http://ewww.kumamoto-u.ac.jp/en/international/topics/

■Establishment of an overseas office

In order to improve the international presence of Kumamoto University and the expansion of the international exchange network as well as facilitate human resources exchanges, the “Kumamoto University Forum” is held both domestically and internationally. The Forum has been held in Shanghai, China (2005), Daejeon, South Korea (2006), Surabaya, Indonesia (2008), Hanoi, Vietnam (2010), Shanghai, China (2011) and Surabaya, Indonesia (2013).  In 2009 the university held the “International University Presidents Forum” in Kumamoto, to which representatives of 25 affiliated schools from 11 countries were invited.

■Program for Promoting the Enhancement of Research Universities