Mahidol University is one of the prestigious universities in Thailand representing with historic Siriraj Hospital established in 1888.

Since conclusion of university-level agreement with Kumamoto University in 2013, universities have been promoting mutual exchange of researchers and students.

During the informal talk with President Harada, history of the exchange in the recent years have been reported, as well as the promotion plan for further exchange.

The delegates also paid a visit to Professor Ando, Dean of Faculty of Life Sciences, and had a concrete discussion about Double Degree Program.

Along with the courtesy call, given a chance to tour around the Kurokami campus and University Hospital and deepen the understanding of facilities of Kumamoto University.

The event has been part of contribution for the promotion of further exchange. 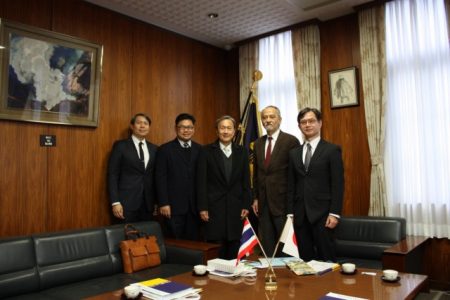